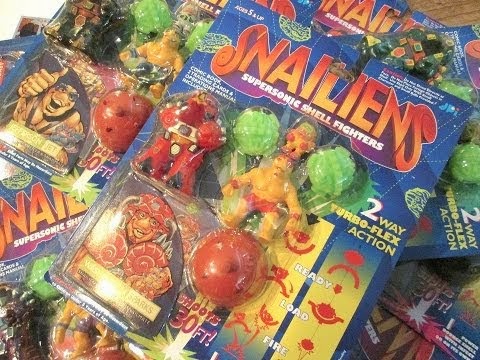 for me, the jury's still out re. Quest's Toy Hunter >> it does unearth a few gems ( like last night's episode which showcased the work of an ex-Toy Biz designer ) but, seriously it's a big fat set up. anyway, my lack of luv for the show took a further poundin' when we met, Dave. A new ' toy hunter ' who helps sniff out plastic for the main man, Jordan when he's too busy toy shoppin' with his celebrity pals. now, usually the show harps on about Star War or Mego figures so i was surprised when Dave started ' informing ' us of lines such as Barnyard Commandos and Snailiens. i'm not sure if it's the fact that the show is now coverin' off my kinda toys or whether it's a ' get it right you dick ' kinda vibe, either way it made me wanna post the amazin' Snailiens ad from way back :