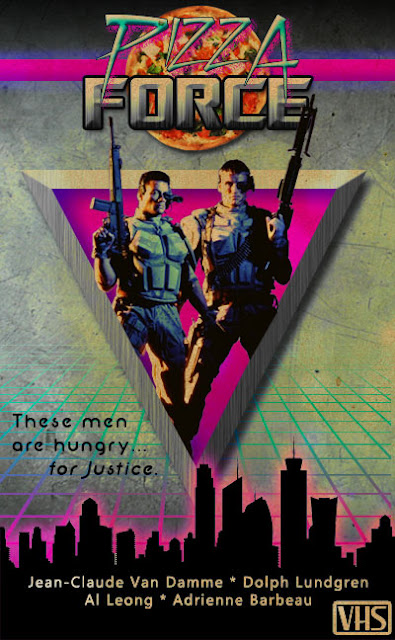 This rare gem of a movie tells the tale of a horrific cyberpunk future where real food is a luxury and proper nutrition is a privilege. The heartless corporation NutroCorp ensures that the public only gets the bare minimum of vitamins every day, leading many of the underclass to illegally download food through matter replicators. These downloads - known as ‘Hunger Crimes’ - are punishable by brianwipe and relocation, the sentences carried out by members of the Food Protection Agency, also known as ‘the Pizza Police.’
The story begins when Luco (Van Damme) and Ryot (Lundgren) are caught in the middle of a food bust on some illegal downloaders; Luco meets a gorgeous young woman (Barbeau) and breaks the law by letting her escape, causing friction between her and Ryot. The drama builds as Luco and Ryot end up fighting their own company after they discover a terrible secret, and the climax of the film is marked by a bloody gun battle in the middle of the NutroCorp food factory floor. A rare gem, Pizza Force will round out any die-hard action fan’s video library.