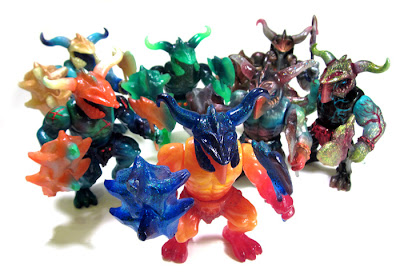 MonstreHero are back >> back with a massivE bang in your (AXE)face !! AXEFACE B.C is simply lush... shades of He-Man, Lost World of the Warlord, Blackstar & a hint of Conan ! the colourways are jaw droppin' & the accessories are siiiiick !! gud buds Sean & Cliff say : " AXEFACE is the Scourge of Pre-history and the Ancient Enemy of the Skullmasters. The spawn of ancient beasts and dark science, the AXEFACE clan is renowned and reviled for their brutal combat skill and blood magic alike. On the battlefield they are cruel and merciless, their arms and armor crafted from the bones of their fallen foes. An AXEFACE is alway ready for a rumble ! "

standin' around 4" high & dropping 2day, Fri June 1st @ 12pm PST !! this being the first ' official ' release ( the other being a few samples at last year's Designercon ) the guys wanted to push the prehistoric boat out so each fig will come with an old-school toy catalog + print >> you have been warned, DON'T SLEEP when this drops !!! 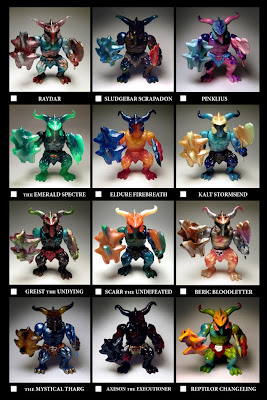