Tanklopula's 1st drop ( the Minty Fresh edition ) sold out in less than an hour @ this years Toy Street >> WOW !!! big-up's to Jesse for a bad-ass lookin' stand / table & if you missed the man himself ( talking about the event + all his wares ) check out Geek Stuff's Toy Street spesh : HalfBad Toyz were @ Toy Street too ( also in the vid ), these guys are nu on the block but killin' it with every release... their FOES line is amazin' >> in fact my Skekiltor is been painted up as i bash the keys with my ape-like banana fingers ! keep an eye out for the incomin' Plognark figure too. anyhow Adam picked up a Tanklopula from Jesse's table & just check the fruits of his labour : 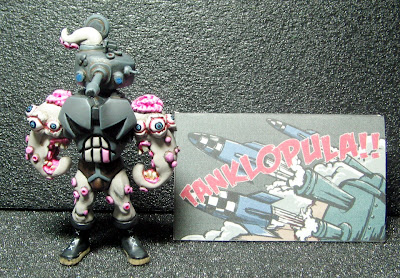 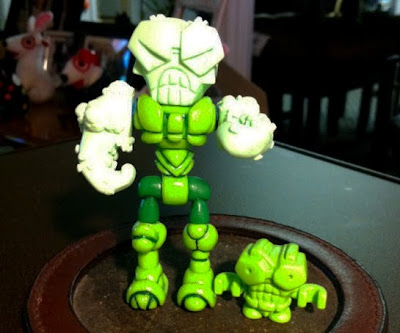 likin' the ickle Nibbler companion, Rob ! so what of our Tanklopula release : the Toilet Fresh edition ! well ' BREAKING NEWS ' it now looks like we'll be headin' across the pond & down the coastline for SDCC this year... sooo we're now thinkin' about saving our batch for an Xclusive SDCC drop. apologies if this has pissed anyone off - it's just we're gonna need toys to sell if we rock up on a table ! to sooth the news, we're currently cookin' up a brand nu 80's inspired Triclops release especially for SDCC >> it'll be a resin release, hopefully ( we if get it all cranked ! ) a triple ' sluggy ' figure pack >> more news soon !
Email Post