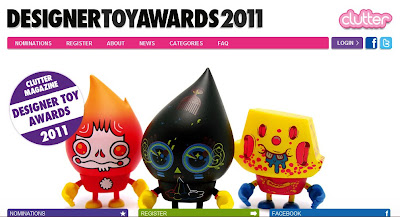 Clutter Magazine are very excited to announce the 1st annual International Designer Toy Awards ( aka the DTA's ) - hosted in San Diego, California at the SDCC 2011 >> the Designer Toy Awards celebrates the creativity, innovation and artistic excellence in the Art Toy market, which after more than a decade has not only become a prominent and legitimate form of artistic and commercial expression, it is one of the leaders in global trendsetting. this award ceremony will celebrate the best of the industry’s artists, designers, customizers and manufacturers, as well as honoring those involved in championing Art Toys throughout the world. the awards will have two components 1 ) a carefully selected board of professional artists, producers and impresarios ( believe it or not that means us ! we made the judging panel - bribe away !!! ) will choose a group of nominations from the many designs released over the past year... & 2 ) there are an entire group of awards chosen by YOU ! yeah thats right, The DTA PUBLIC awards feature special categories that are open to the general public for popular voting >> get nominatin'
Email Post