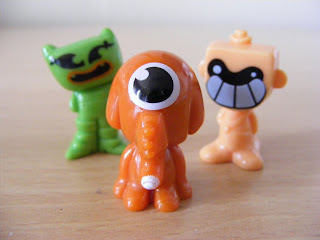 The mainstream toy industry is constantly trying to come up with the 'Next Big Thing' - 'playground craze' is such a difficult market to crack because kids are so delightfully fickle and unpredictable. Over here in Blighty at the moment, go-gos are the latest fad. Originally called Crazy Bones they were apparently launched in Spain 10 years ago so they've been a while hitting the mark. I picked up this latest iteration in WHSmiths earlier in the week and the styling has come a long way from the cheap and nasty plops of plastic we acquired a few months back. There is a decidedly designer vinyl element to the features now. I particularly love the unfathomable 'elephant-kind-of-a-thing' in brightest brown. 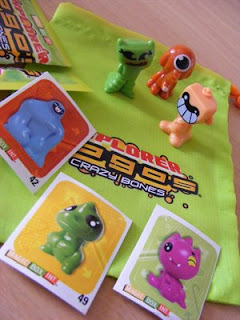 This pack included 3 go-gos, 3 stickers (of other go-gos, an ingenius way to drive collectability) plus a day-glo drawstring bag to proudly convey your go-gos between playground and class. All for comfortable pocket money at £1.50p I want that blue one.
Email Post