like Arnie it's back ! and dis week it's a weird one - not just because it's a bootleg Kinder Egg but, because the toys inside are A.T.O.M ( Alpha Teens On Machines ) themed... a toy line very close to my heart, as i spent many years working on it whilst @ Hasbro. the toy line was brilliant : killer characters, great vehicles & a lush cartoon ( shown on Jetix ), however i can't say the same for these ' naff ' bootleg Kinder toys... the inflatable King is OK ( not sure why ? ) but, a jigsaw ! anyway, TRIchocs star rating 3 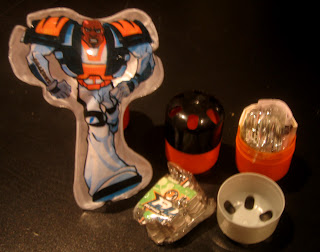 as you've probably spotted there's no actual chocolate in the image... ummmm, that's because it was sooooooo poor it just crumbled as soon as it was unwrapped : rubbish ! anyway big thanks to the StKhouse for passing these on to us - cheerz mang :)
Email Post

Kenn Munk said…
an inflatable in a kinder clone is pretty cool. And on a twinkie note, I was very, very tempted last time I was in Cyber Candy, but I was with civilized people who wouldn't have understood...
11:52 pm

TriclopsRobotboy said…
Dang those civilised types, you should hang around with us more often. We wholeheartedly support twinkie-based purchases (but always check the label to avoid disappointment).
11:45 am