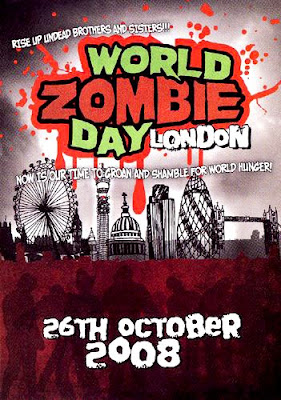 gud bud Fuzzball brought dis to our attention... on Sunday the 26th of October ' Zombies ' all over the globe are going to wrench themselves onto the streets in honour of the 40th anniversary of Night of the Living Dead - plus, to do a little for charity. the Zombs of London are no exception, as down in Marble Arch 100's of peepz will be groaning & shambling to raise cash for the homeless... spookily dis is happening the day after my Bday nite out, so if we're still ' on tha bus ' there's no doubt we'll shuffle on by !
Email Post