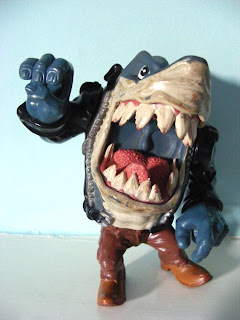 I had somehow missed the 'Street Sharks' cartoon when it was originally aired in the nineties but on Apeman's recommendation I wikipediad it (http://en.wikipedia.org/wiki/Street_sharks) and was sold on the idea. Apeman's ebay obsession continues and he pointed my cursor in the direction of this masterpiece... a bit shabby around the teeth but aside from that, a 'Jawsome' figure which by my powers of deduction is 'Ripster' the Great White.
Email Post