i'm gutted to read ( on www.bloody-disgusting.com ) & report that Rob Cohen ( director of shite movies such as xXx, Stealth & upcomin The Mummy : Tomb of the Dragon Emperor ) is in talks with Paramount Pictures to remake cult 80's classic Monster Squad. WTF, i know mr Cohen was one of the original producers of Fred Dekker's movie but come on... enough feckin remakes ! if dis actually happens ( which i pray 2 god it don't cause it's one of my top 5 all time favourite films ) it will SUCK : unimaginative Hollywood hacks ! what's the next 80's movie to be butchered by dog-toffee, talentless ' now ' directors : The Goonies, Jaws, Ghosterbusters - i hear rumblings of a nu RoboCop remake too... ahhhhhhhhhhhhhhhhhhhh, rant over : in a bit 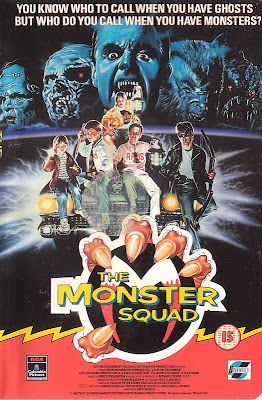 . said…
I love this movie and KNOW that it will always be better than any remake ever made of it. If this kind of monster rally were to happen in real life, it would not be as good as this film.

Great fact: The ridiculously awesome Gillman costume in the Monster Squad was the first suit that these creature creators ever did. The next costume they worked on using what they learned doing Monster Squad? Predator.
6:05 pm