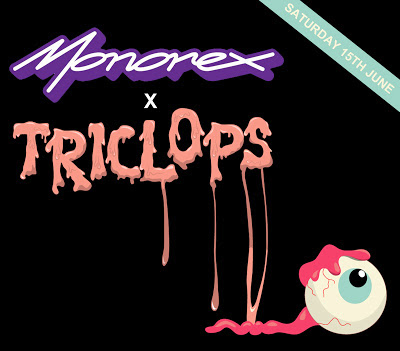 Monorex is havin' a big-ass party & you're all invited >> what's tha skinny !? well, dis summer Monorex is turning 9 & they've chosen Hoxton Arches to host a three-day saturation of art from June13th-15th ( next Thur-Sat ).soooo much on the bill it's insane - brand showcases, the curation of limited edition & commissioned art from the Monorex archive, themed talks by our company & other celebrated creatives ( that includes us !! ), live screen printing, art battles, burger battles + music provided by guest DJs ! we're very honored to be involved in dis, BIG thanks to Terry for askin' us in & fingers crossed you fancy comin' down to hear us talk. we'll be chatting through concept & character design re. the day job ( our Creative Consultancy ) plus, how to get into makin' toys & customs in the designer toy scene. 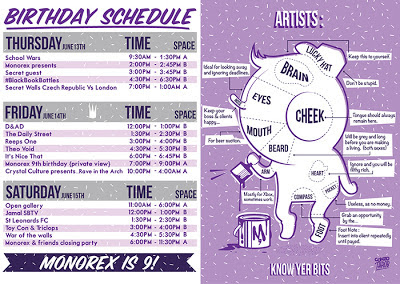 ere's a mini breakdown of whats happenin' on each day >>

Thursday 13th
Thursday kicks off with our education program, School Wars. Prepped for battle, the children will be separated into teams, armed with black markers, and given 90 minutes to out-draw one another on white walls, the artwork of which will be on public display that evening. Monorex later takes to the stage to discuss Art and Illustration, preceding lectures by Creative Social and Bernstein&Andriulli. Concluding the talks is our pal Pete Fowler, letting us into the world of his creative imagination, Monsterism. Secret Walls then raises the bar with a battle of its own. Four agencies go wall to wall, each team captained by a Secret Walls artist. Their battle for supremacy, fueled by guest DJs, exhausts day one.

Friday 14th
On Friday, Monorex hosts lectures on Arts and Culture featuring talks from D&AD, Daily Street London, Jamal SBTV and Brett from Theo Void. Later, Monorex curates a pop-up exhibition just for you featuring the likes of Ryca, Pete Fowler, Alfa and Mr Gauky. Then as the sun goes down, the volume and smoke goes up as guest DJs stir up the speakers and chefs fire up the barbecue for Monorex’s rave in the cave.

Saturday 15th
The venue transforms on Saturday into a public gallery with the gift shop offering limited edition prints, posters and t-shirts ( prints averaging just £50 ). Monorex enters the spotlight once more, narrating our nine-year journey through the art world. Following us will be talks by the Triclops Boys and Jonjo from Toycon, talking vinyl toys, as well as Tarik and St Leonards, explaining Nike’s creative conception of their football team. Finally, War of the Walls breaks out on the party plain with a debate between our supporters and aggressors, questioning the future of graffiti now influenced by a commercial world.

get involved peeps >> no catch, just click HERE to get ya tickets ! OR just enter our Xcluisve Monorex x Triclops competition to win a ticket !! we have 5 tickets to give away just simply ( & quickly ) email info@triclops.co.uk with the answer to this question - what is the name of our resin, mini figure line which pays homage to shonky toys ? is it a) T.W.A.T b) B.E.L.L.E.N.D or c) B.A.S.T.A.R.D