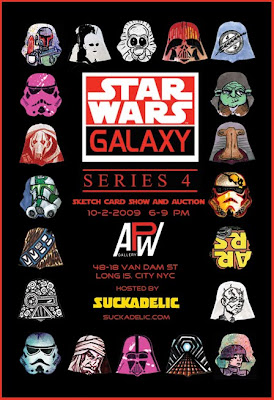 the SuckLord is back on it - bringin' us another excitin' SUCKADELIC art party in NYC ! The Star Wars Galaxy 4 Custom Sketch Card Show & Auction kicks off on the 2nd Oct @ APW Gallery, Long Island 6-9pm... what is dis i hear ya scream ! well, a while back the SuckLord was asked by the mighty TOPPS Trading Cards to put together / curate a series of blank, limited edition die-cut Star Wars cards - in tha shape of Darth Vader & a StormTrooper. so a rebel gaggle was put together ( MCA, Mishka, L'amour Supreme, Sket One and many many more includin' us, tha Clops ! ) and set to work / drawing / painting / customising those cards ! a selection of these cards were then filter into actual packs & sent out to shops across the globe... 6 ( from each artist ) were held back for this show - they will be for display & auction on the 2nd Oct, dats this Friday peeps ! you are personally invited by the SuckLord to head out, see the work, place some bids, and get a cool buzz going with more FREE beer thx to BEERLAO ! 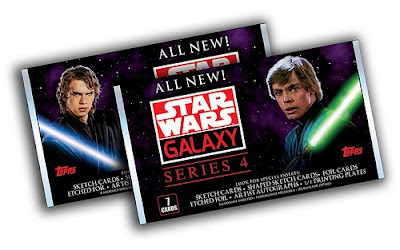 there' s also X-large, painting-size trading cards on display by some of the superstar artists from GALAXY 4, plus a handful of custom Sucklord figures ( by GALAXY 4 artists ) & we will have have available for the 1st time, the new SUCKPAX Suckadelic indie art card series. dis is a nu series of retro style trading cards designed by the SuckLord himself. tha packs are loaded with original sketch cards, mystery chase pieces and the promise of a 'golden ticket' redeemable for a fantastic prize ! sounds like a ' top ' nite out if you ask us... shame we're not out in NYC until Halloween wkend, however if you're in tha neighbourhood go support & in the words of the Super SuckLord himself " This is gonna be pretty dope, bring some money or at least your bad self & get involved in the next Trading Card revolution ! I'm running it, so you know it's gonna rule. Everything I do is awesome, you knew that... " ere's our 2 sets of cards if ya interested in buyin : 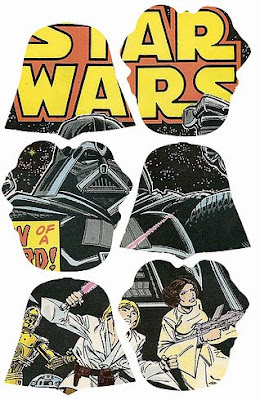