Top of the Clops 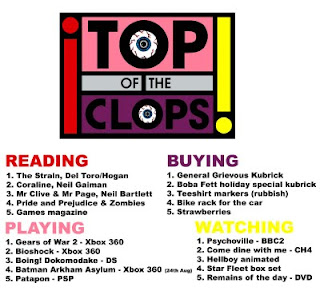 Totally into 'The Strain' at the moment, vampire novel by Guillermo Del Toro (big hero of mine) and Chuck Hogan. Edge of the seat stuff and no doubt another one to look for in cinemas soon. Coraline was a great read too, haven't seen the film yet (notoriously bad at getting to the cinema so have pre-ordered the DVD instead) but amazed that the default is still to brand a book for children if the hero is a child. I think there is a lot more to Neil Gaiman's stuff than Enid Blyton, wonderfully dark and scary plus Dave Mckean's illos as ever support the mood. Was severely disappointed by recent 3" Star Wars Kubrick purchases, Medicom have lost my respect because they look and feel really cheap, especially when compared to earlier series in the collection. Bought teeshirt markers but they are crap, it's impossible to draw properly on fabric.
Email Post