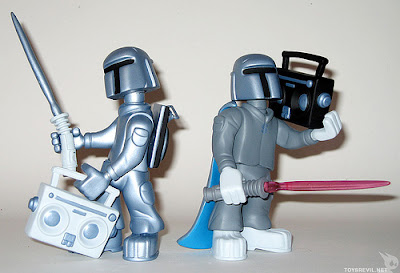 we're big fans of the Sucklord & his mighty bootlegging empire 'ere @ Clops HQ ( just recently picked up his SDCC exclusive : The Surge ! ) so we're pleased as punch to hear he's releasing a vinyl figure dubbed SUCKLORD600 ! there'll be 2 colourways : grey with black boombox ( 700pcs ) & all silver with white boombox ( 300pcs ). we've justed recently seen the Sucklord video / interview done in conjunction with the guyz at Mimoco - very funny & a wikked insight to the Sucklords bootlegging toy ways . . . may the force stay with ya mang : your stuff kicks ass ! for a more in depth interview with the man himself head over to mr. evil's blog : http://toysrevil.blogspot.com/2007/08/prepare-yourselves-for-coming-of.html
Email Post