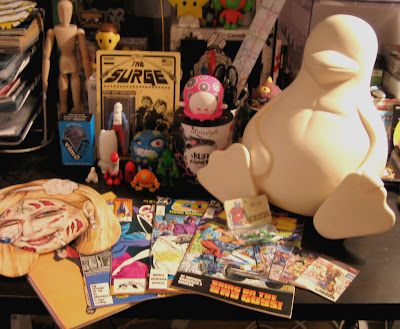 i didn't go as crazeeee as Robotboy but, i did manage to purchase a few 'gems' from the biggest toy show i've ever seen ! me gems include - the latest Sucklord figure : The Surge / a Buffmonter 'booby' toy / one of the nu Jim Henson City Critters / a Bent World Vandel ( mr. chisel i fink ? ) / a brand spankin nu Madball : sooooo kool ! ! ! / a DIY mimoco ting : custom comin soon ! / a Shadow colouring book dated 1974 ! / a stack of comics : includin' 80's toy classic COPs ! / a set of Hollywood Zombie tradin cards : kinda like GPKid's but with a horror twist ! / a Comic Con green Zombie figure from the kind peepz @ October Toys . . . PLUS ( just in case u can't see it ! ) a massivE gwin - which we'll be customisin' for the up&coming October Toys Gwin Custom Show . . . more news on that soon. i fink that's it - apart from the creepy Paris Hellton Zombie Mask on the left. i'm not gonna attempt to take a snap of all the badass t-shirts & trainers i bought : doh !
Email Post