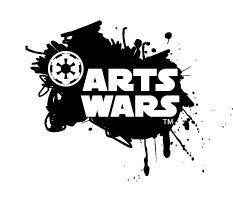 we've had 2 keep mum about this 4 a while but, now we have the all clear . . . The Vader Project enlisted 60 of America’s underground artists ( each of whom received a 1:1 scale replica of Darth Vader’s helmet that served as a blank canvas to decorate ) to render and adapt the lid as they saw fit. more than 60 artists contributed to project, which premiered at Celebration IV in May. it now makes its first-ever appearance outside of America at STAR WARS CELEBRATION EUROPE 'ere in the UK ( Excel, London ). all the custom helmets from the USA will be joined by more than 20 new and exclusive helmets : all created by some of the the UK’s hottest talents in the fields of art, design and illustration. featured UK Vader Project artists include : Asbestos, BRENB, Build, Chris Judge, Container, dan&dan, Fos, Guy Featherstone, I Love Dust, JaKE, James Taylor, Jon Burgerman, JOOLS, J. Otto Seibold, Jude & Lerman, Marcus Broome, Mark Ecko, Mark James, Morpheus Design, Neil Mcfarland, Not Bad For a Girl, Oliver Jeffers, Pete Fowler, Peter Kennard & Cat Picton Phillips, Pinky, Puma Design Team, Romero Britto, Serge Seidlitz, Shag, Symbiotics, Swifty, Tado, Tim Biskup, Togetherplus and the mighty Triclops ! ! ! we're so chuffed ( if not shittin' it ! ) 2 b apart of this fantastic show - massivE shout out 2 Dan from Dan&Dan for the hook up - u're da mang ! we'll blog some sneaky snapz as we get closer to the main event.
Email Post